Llangrannog  is a small, coastal village and seaside resort in Ceredigion West Wales, between Aberporth and New Quay

The earliest parts of the village (the “church village”) lie above the waterfall hidden by a twist of the valley from view from the sea. This protected them from the attention of sea marauders, the Vikings and the Irish. After the mid-eighteenth century the sea became safer and ‘Llangrannog beach village’ and small seaport developed.

By 1825 Llangrannog commercial activity was largely concerned with the sea, including the shipment of coal. A number of ships were built on the sands, the largest the ‘Ann Catherine’ a brig of 211 tons. The last developments, in the 1860’s, were the ribbon village which connected the beach and church villages; and extension of the beach village on the southern slope of the valley. Partly this accommodated the increasing local population, but also for the beginnings of tourism.

By the Llangrannog beach there is a shop, two pubs The Ship; and the Pentre arms, and The Patio Café, which serves delicious home made ice creams, and if you are walking on a cold day, why not treat yourself to the excellent fish chowder. 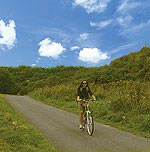 *There are two car parks in Llangrannog, one is clearly marked before you drop down the narrow road to the beach and is FREE. The second car park by the sea is very expensive and requires good eye sight to be able to purchase your ticket. It is privately owned and uses cameras.

Accommodation and Attraction Providers - Wish you were here? - complete this contact form.
This website uses cookies to improve your experience. We'll assume you're ok with this, but you can opt-out if you wish. Please see our cookie policyI'm fine with that
not sure